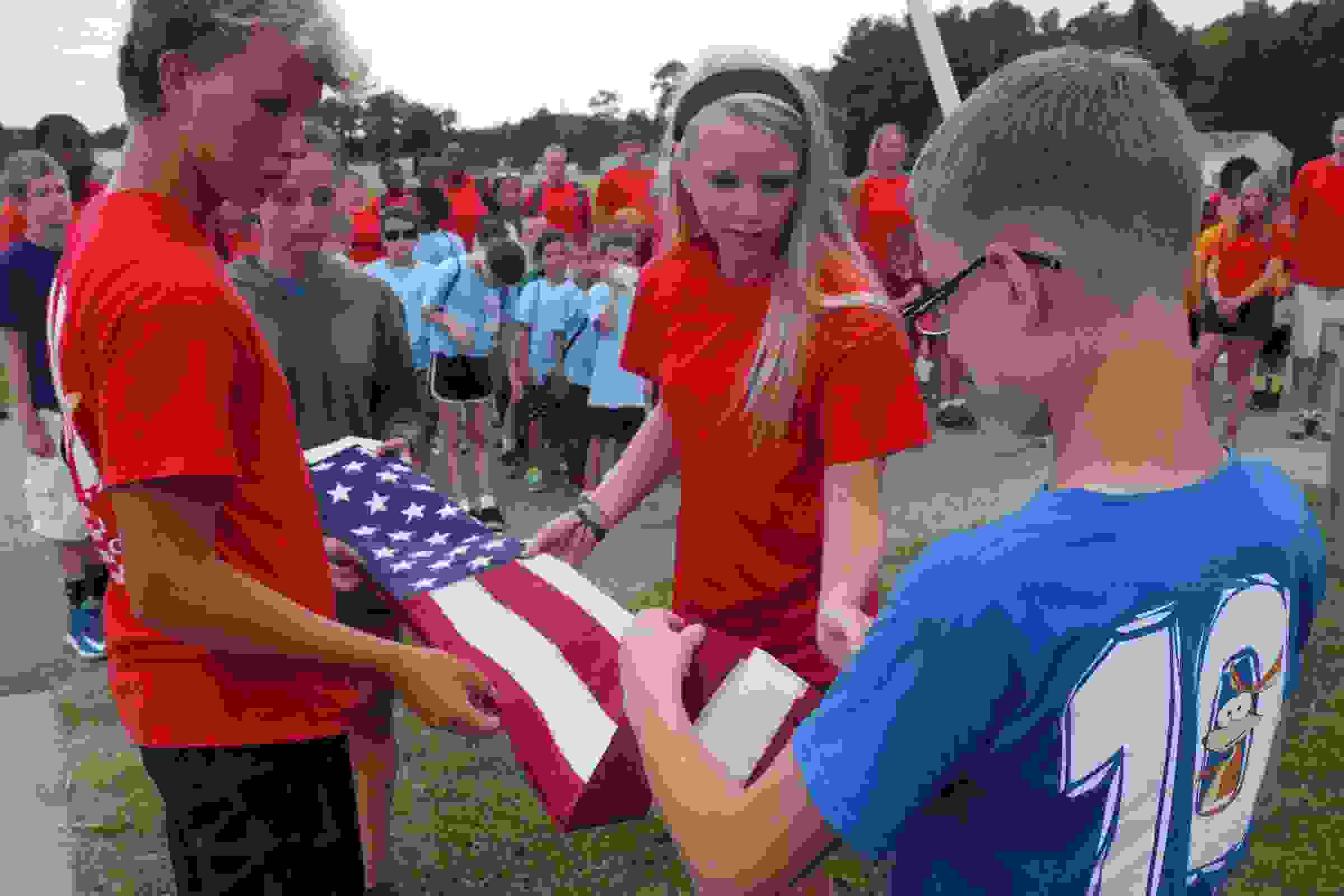 ARNG Teens On The Move

Military children and teens across the country demonstrate each day how resilient and talented they are.  The Army National Guard Child & Youth Services Program has dedicated this page to highlighting the amazing accomplishments of our ARNG CYS teens.  #GuardTeens

This report comes from the East Coast state of Virginia. The Youth Program held a week long virtual camp, and the teens helped plan, market, and led activities during the week. One teen even came up with the idea to have an end of camp slideshow, and made that happen.

The teens and adult leaders met before the camp started to talk about what they wanted the camp to be like. The State Teen Panel helped create marketing videos, they shared their ideas for activities, and talked about how best to engage youth in an online format. The teens voices were heard during these meetings, and their suggestions were used in the development of the camp.

During Camp, our teens primarily assisted in the breakout sessions of the virtual camp. These were individual zoom calls that took place in the afternoon of each day with each camp group.  Pairs of teens facilitated discussion questions and a virtual teambuilding activity during the session.  Prior to camp, the Youth Program Leadership Team scheduled a series of practice sessions where their teens had the opportunity to practice leading a virtual teambuilding activity so that when camp arrived, they were professionals.  Leading up to camp, the teens also submitted videos of themselves performing at-home Olympic challenges, to go along with the Olympics theme of the camp.  These were used as the examples for the campers to stir up excitement to participate.

A select few of their most senior State Teen Panel members joined the Leadership Team on the live-streamed activity sessions to act as co-hosts.  Here, with minimal coaching, they comfortably took the reins as MC’s to the camp content and announcers to the virtual talent show and Olympics challenge. Finally, one of their teens assisted in curating all the photos of the week and producing our end-of-camp slide show.  This was a task she requested to take on without prompting from Joe or the other members of the team. They saw this level of excitement to participate from many of the youth who seemed eager to share in a meaningful camp experience.

The Youth did an amazing job in all of the parts of the camp, from the planning, the executing, and helping with the wrap up. Virginia’s teens stepped up and gave the youth of Virginia a great camp experience that they will remember. Thank you to Joe Duerksen for this report, and thank you to the teens for all of their hard work!

This story comes from the northern state of Minnesota.

MN Teen Panel members came up with a way to reach young children by reading books they would typically hand out at Yellow Ribbon Reintegration events. The idea for this project came from the teens in the program. A few of the teens had participated in the United Through Reading Challenge over the summer, and saw this as a way to continue reaching out to younger children.

United Through Reading is a nonprofit organization that helps connect military families facing physical separation by facilitating the bonding experience of reading aloud. It was started by the spouse of an Active Duty Navy Flight Surgeon. The Surgeon deployed to Vietnam, and when he returned, he was a "stranger" to his daughter. United Through Reading's founder was a reading specialist and understood the value of exposing children to literature.

The Minnesota teens read seven different books and posted the YouTube videos to the MN CYS Facebook page.  One of the books read was Twenty-Six Princesses, a book which teaches the alphabet and rhyming.  Another book read aloud was Goldilocks, which has the message that you should think about how you treat others. They also read Fancy Nancy Sees the Stars, which has the message that sometimes in life you have to be flexible. In general, all books read contained positive messages for youth and aspects of building resiliency - as one would do through the Master Resilience Training initiative.

Under normal circumstances, the MN Teen Panel would host an in-person service project, but was not possible due to the current pandemic. This initiative was a great way to serve their military community, that was also safe and fun. The intended audience for this project was parents who have young children at home and who like listening to books. You could feel the joy and passion in the teen’s voices when they read the books. This was a great teen led initiative.  Thank you, MN Teen Panel members and the Child and Youth Program staff, for all of your hard work.

You can learn more about the United Through Reading program by clicking here.

The idea for this project came from one of the youths in the program. The youth saw an opportunity on Facebook and reached out the CYPC team, who then reached out to the point of contact.  After a few emails they settled on a date and time for the project.

The group helped remove many trees that had been killed by spruce beetles. The beetle lives under the bark of trees, and the adult beetles emerge in the spring and bore through the bark of a new host tree. Female beetles excavate galleries in which they lay eggs. The newly hatched larvae create feeding tunnels at right angles to the larger egg galleries, where they complete their one or two year life cycle. If numerous beetles attack the tree, the resulting brood can girdle and kill the tree. (For more information on spruce beetles, click here)

The group started the day with a safety brief, and waited for a chainsaw crew to cut down about 15 trees, and to cut the limbs off of them so they could be carried easily. One group of teens put the downed trees into a truck that was headed to the dump, and a second group cut the grass and raked the yard of the facility. There were a total of five youth volunteers who helped with this project. This is another great example of a teen led project. Way to go Team Alaska!

Thank you, Alaska State Teen Panel, and the Child and Youth Services Team, for all of your hard work to help your community!

This story comes from the great state of North Dakota, and highlights a service project their Teen Panel participated in during the summer of 2020.

North Dakota National Guard (NDNG) Child and Youth Services and the NDNG Teen Panel wanted to give military kids something back, since they had to cancel all in-person events/camps since March. So they came up with Camp Homefront 2020.

Camp Homefront is a four-day camp in a box.  The Teen Panel was put to the challenge and had to come up with things that youth would like to have in the boxes. For each day, there would be a STEM activity, art and crafts, outdoor activities, and also a daily fitness challenge. Some of the things they wanted to see were, bird house builds, slime kits, string art, and Hunt the Good Stuff Journals. There were many different fun projects in each box along with the educational content.

Ten of the NDNG Teen Panel members came in on July 13th, to help assemble all 100 boxes. They presented the Camp Homefront daily activities to North Dakota National Guard Leadership. The teens also recorded videos helping military kids with the different crafts and activities in each box. The videos were posted on the North Dakota National Guard Facebook Page, so children could view it at any time they may have a question or need help. The Teen Panel was also involved in conducting games and activities virtually when the camp took place 10-13 August. They helped select different virtual games, activities, camp songs, and even planned a talent show, so the kids can still connect, if not in person, then virtually.

Thank you to Mandy Malo, Trudy Hjelseth, and the ND Teen council for all of your hard work.

The following story comes from the great state of Kansas, and highlights a project that a former Teen Council member did in 2018.

Jessica Vanstory served on the Kansas State Teen Council during her time in High School. Jessica came up with the deployment kit idea after going through multiple deployments with her own family. She wanted to combine many of the most effective coping mechanisms and put them into a kit. The kit contained stationary for writing letters, a calendar with stickers to count down the days until the family member came home, and a jar of Hershey’s kisses so that the child could have a kiss from the family member each day.

The kits went to 150 children at Amanda Arnold Elementary School in Manhattan KS, which is a few miles away from the Army base Fort Riley. Jessica wanted to support military families, and saw this as a fun way to give back.

Jessica is currently a Music Education major at Kansas State University, and plays in the Marching band and the Wind Ensemble.

This is another great example of a National Guard Teen stepping up and helping her community.

You can view the media coverage this project received by clicking here.

Bethany has been a part of the Youth Center on the base since 3rd grade. During Middle and High School she got involved in many of the Boys and Girls Club programs that they offered. As she progressed through the program Bethany started taking on more leadership and mentoring roles. She served as a Teen Volunteer for two years where she helped set up recreation activities for the younger children. This past year was Bethany’s last year in High School and she decided to participate in the Youth of the Year competition.

This year’s competition had some different challenges than past year’s competitions. Bethany still had to write the essays, get the letters of recommendation, give a three minute speech, and submit her transcripts as required for the process. The speech was given over video, and the interview portion of the competition was done over video call. Despite these challenges Bethany rose to the occasion, and became the NM Military Youth of the Year. She received a $2,500 college scholarship for winning this competition. If she wins the regional competition she will receive an additional $20,000 scholarship and will have the chance to become the National Military Youth of the Year where she can earn even more scholarship money.

Bethany is just one great example of the youth who are a part of our programs. Thank you to the NM team who helped mentor and guide her along her journey.

If you would like to recognize a teen in your program, please reach out to Chris Hopkins (ARNG CYS Child & Youth Program Analyst) at christopher.l.hopkins10.ctr@mail.mil.  Help us as we continue highlighting the awesome achievements of our military youth.